He sits in the tattoo parlor telling me about how Korea is changing. In his unique accent, a mix of Korean and Australian, he tells me about a traditional culture that is moving from conservatism towards one of self-expression.

Traditional Korean views dictate that having a tattoo is taboo. It’s only meant for gangsters or those trying to evade mandatory military service. These stereotypes are rapidly shifting to a perspective of ordinary people seeking a medium for self-expression. It’s an act of defiance against the mainstream. Having to seek out illegal parlors to obtain a tattoo is fitting to the rebellious spirit of this underground group.

Tattooing someone in South Korea is not illegal, but practicing it without a medical license makes it so. Only doctors are allowed to practice the act of penetrating skin with a needle. This means that anything from giving piercings to tattoos without a medical degree is illegal.

I sit in the tattoo parlor listening to him talk. I notice the many faces inked on his body staring back at me, watching. How did I end up here? In Korea, at an illegal shop, conversing with a tattoo artist about the culture he lives and breathes. As the staring contest continues between myself and the many faces, I am reminded that I was listening to Crazy Jason. Why is he named Crazy Jason? Another story for another time perhaps, for now, he was educating me on tattoo culture in a changing Korea. 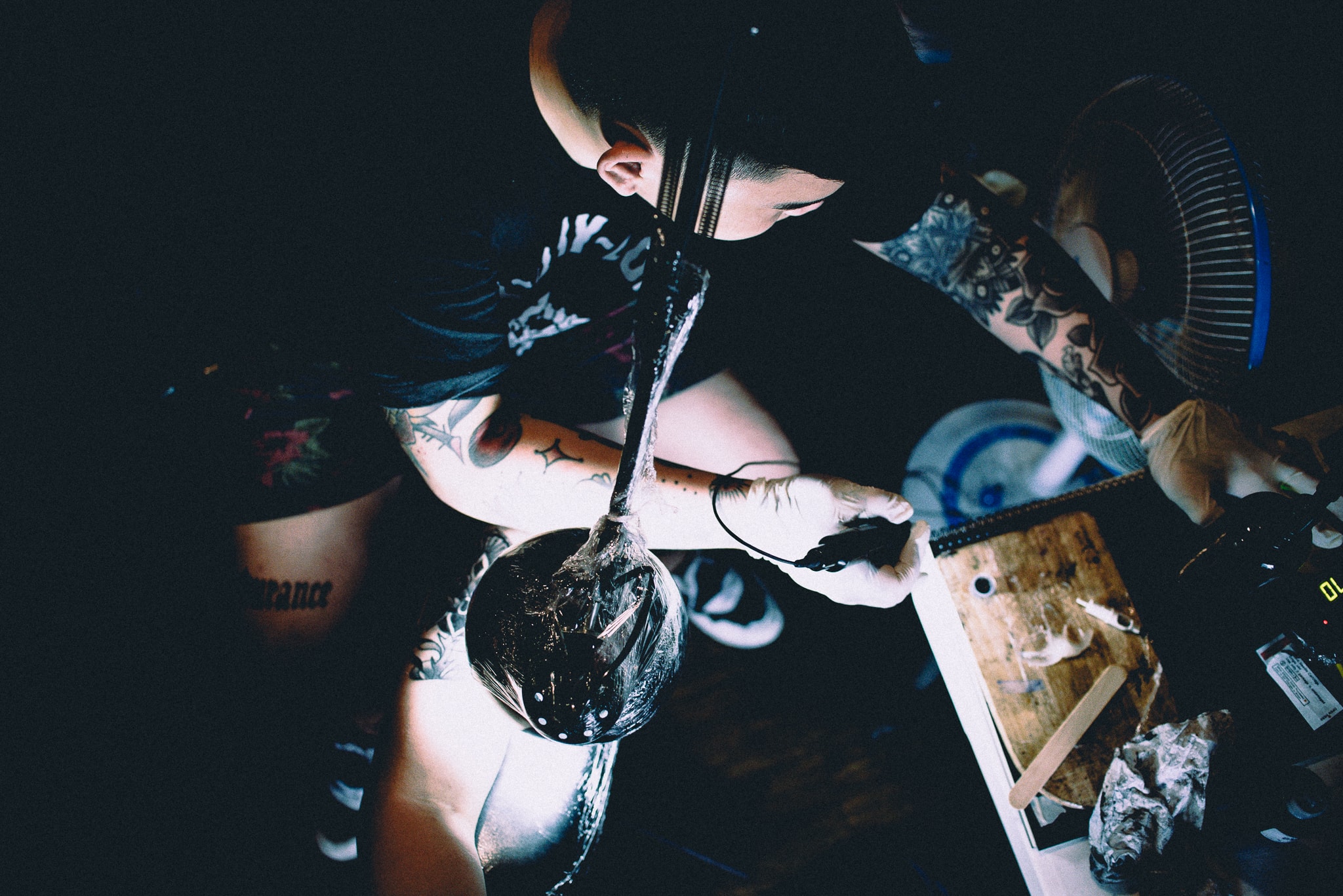 What is the history of Tattoo culture in Korea?

Originally, only gangsters had tattoos. If you were walking around with tattoo sleeves, people would know. They would want to stay away.

How has Korea been changing and how do you think this will affect Tattoo culture?

Is there a difference in style between Tattoo artists from the older generation and the artists now?

Everyone has their own style. It’s who they are and how they grew up. It’s reflected in the design and the art.

How did you become a Tattoo artist while living in a country that considers Tattoos to be illegal?

I learned from my team at the shop. I think of my team as family, we trust each other and learn from each other.

It’s still illegal to give tattoos in Korea, but the cops don’t really care much anymore. Finding the right needles and ink could be hard, but at least the cops aren’t raiding shops as much. 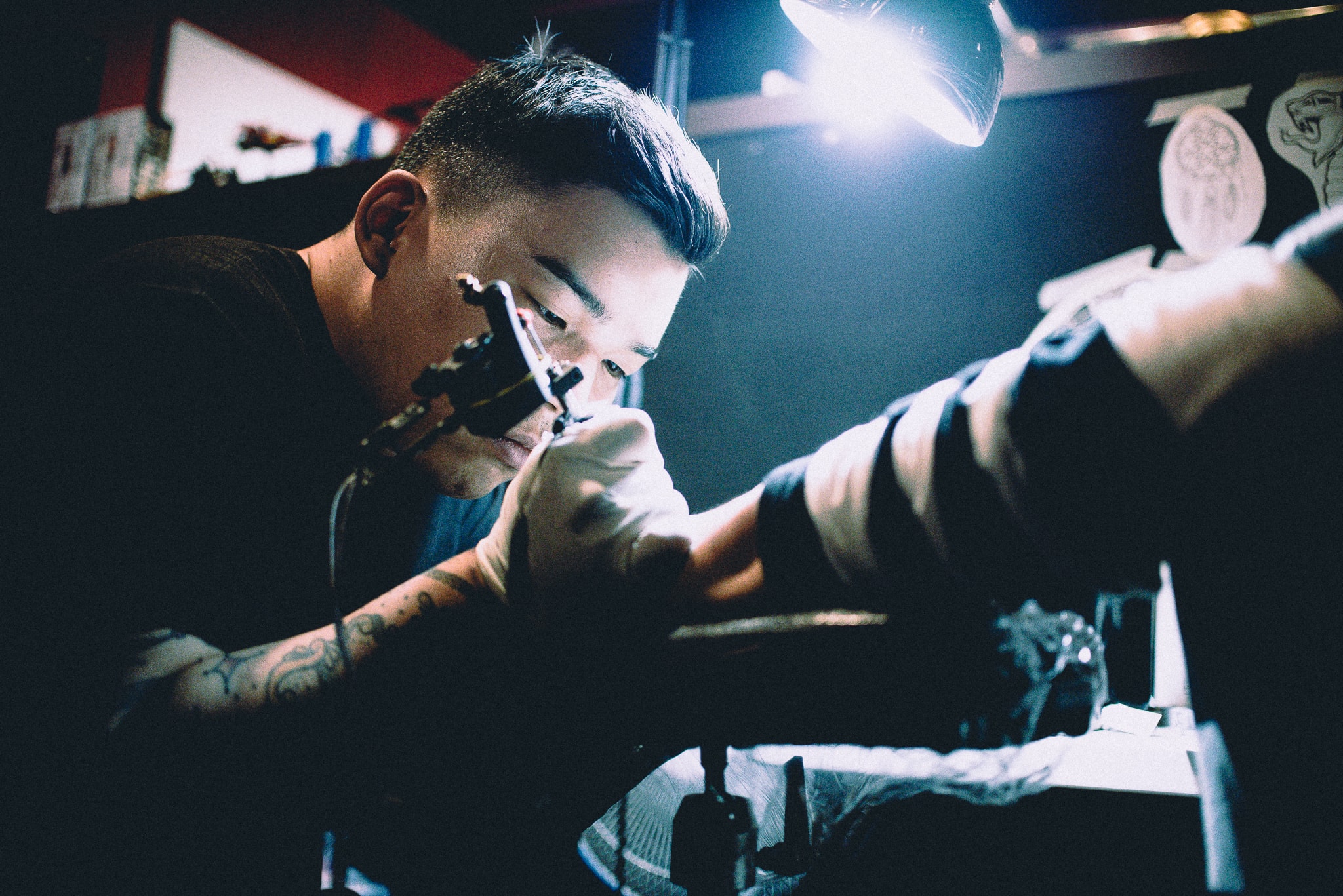 What was it like Tattooing people for the first time?

I was shit when I started, but I had to keep trying. Had to keep practicing to get better.

Everyone has different skin and muscles. It’s all different textures. Practicing was hard because it was different each time.

What is your style of tattoo design? How long does it take for you to come up with a design?

People assume it’s just the time to tattoo, but I’ll spend 6-8 hours, smoke a whole pack to sketch for 1 design. 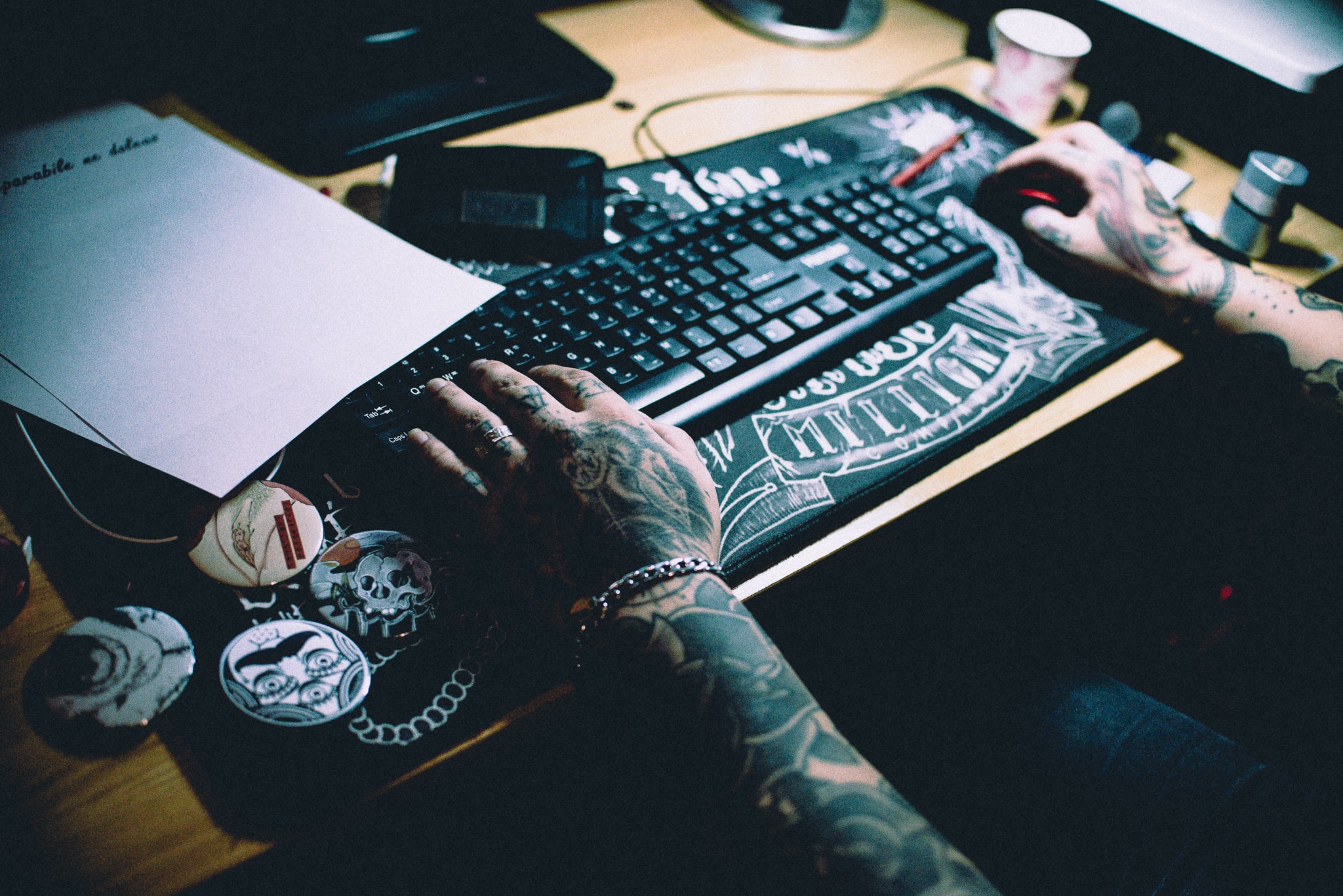 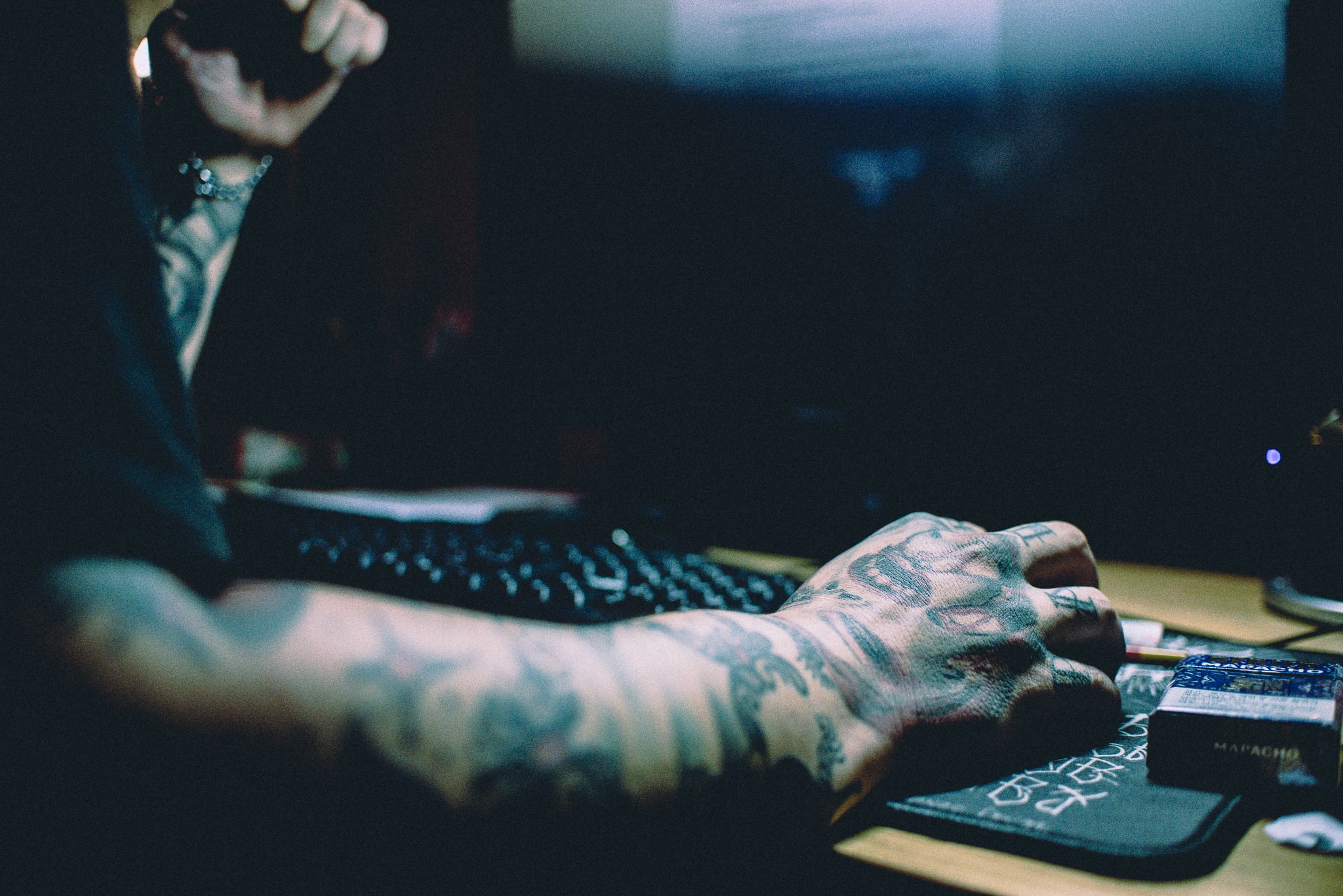 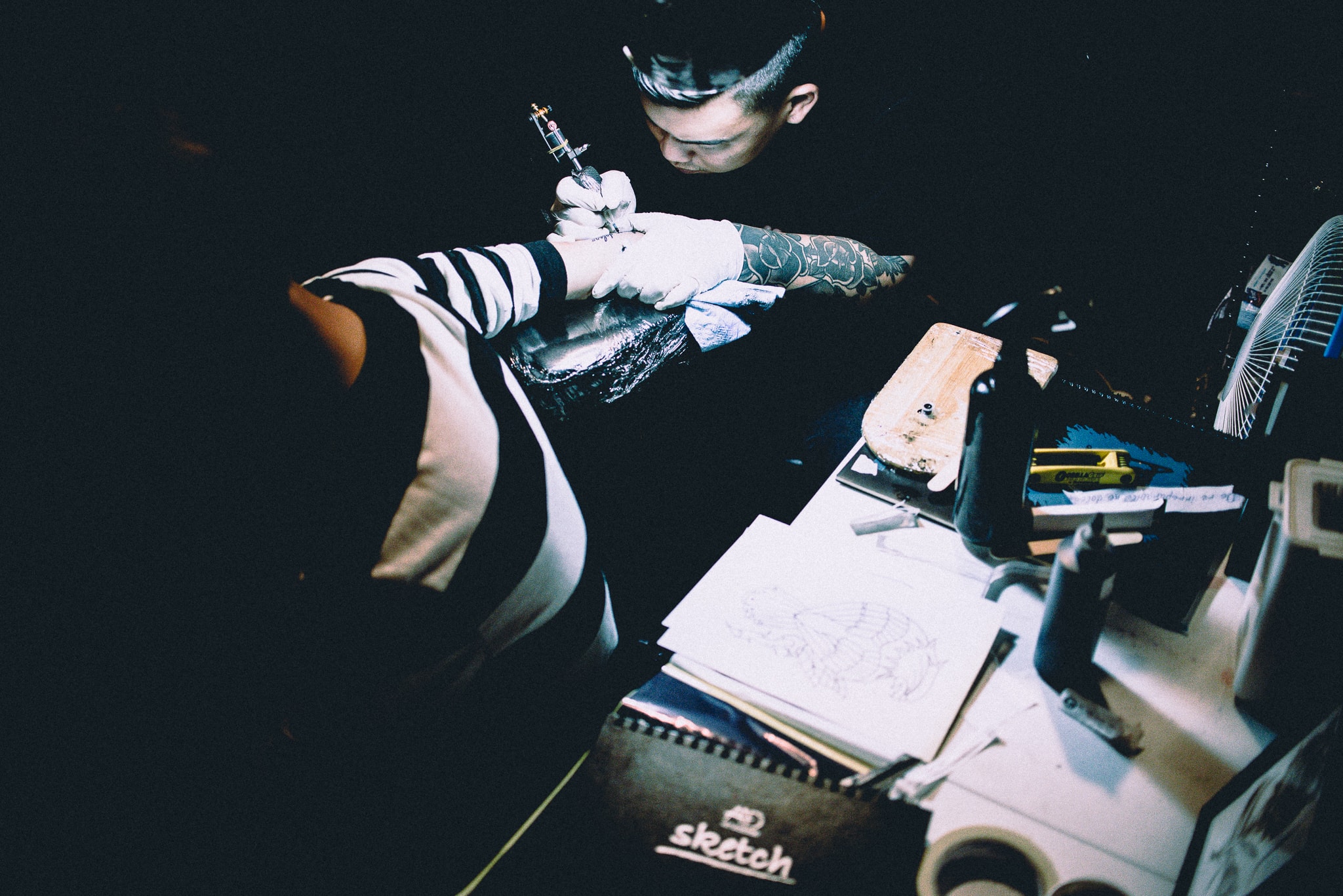 How difficult is it to get a Tattoo in Korea?

You have to know someone. It’s a friend of a friend type thing. You get a number and you call it. Instagram has made it a lot easier.

Most artists here are still in hiding. It’s only in Seoul where they’re more bold. Where it’s not as conservative.

What is the culture like between Tattoo Artists in Korea? Are there still a lot of shops that work in secret?

It’s hard to know other tattoo artists. A lot of shops are still in hiding because it’s still illegal.

It’s art, most painters wouldn’t want to share their skills and secrets when it’s so competitive. It’s the same with tattoo artists.

Art and money are not friends together. 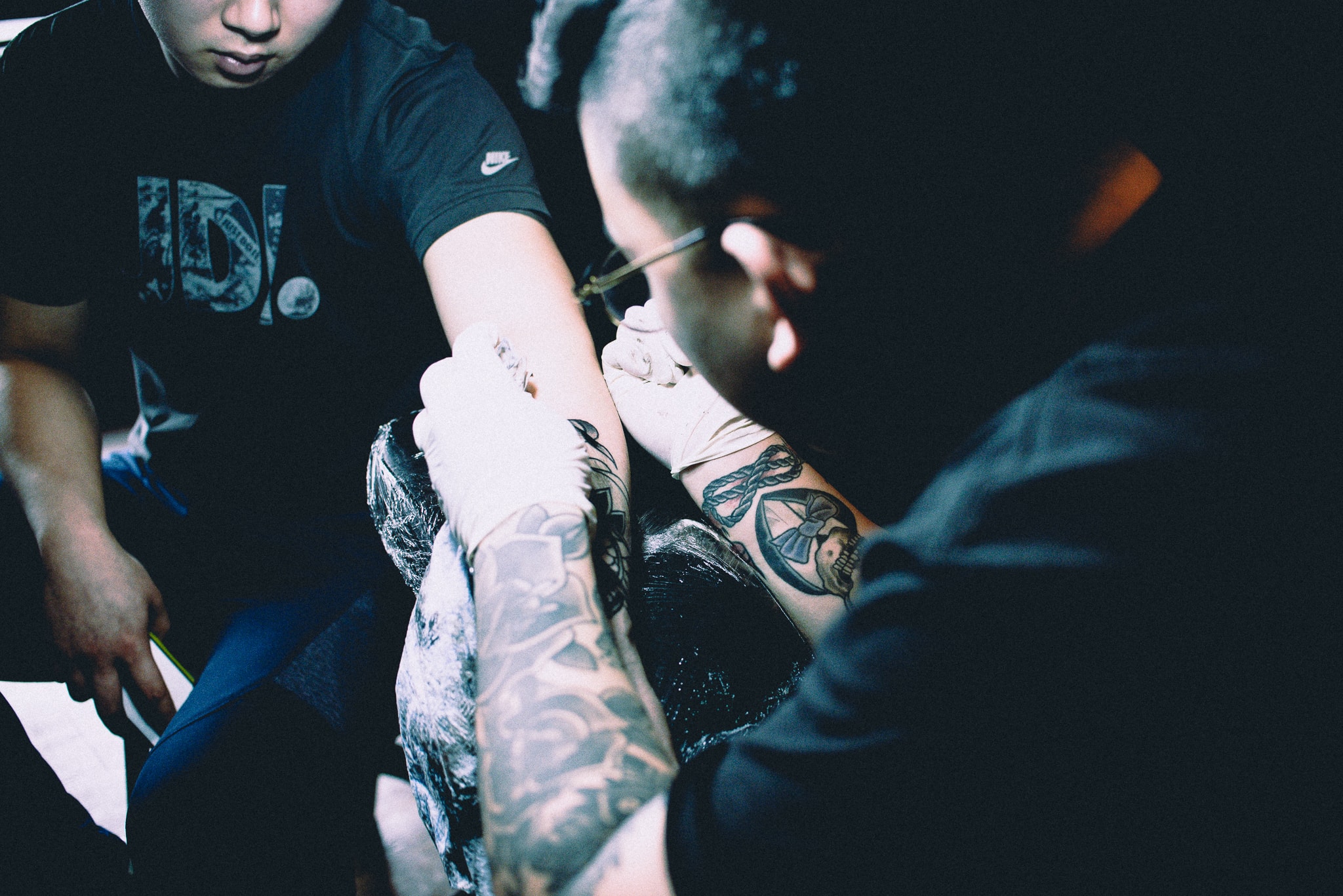 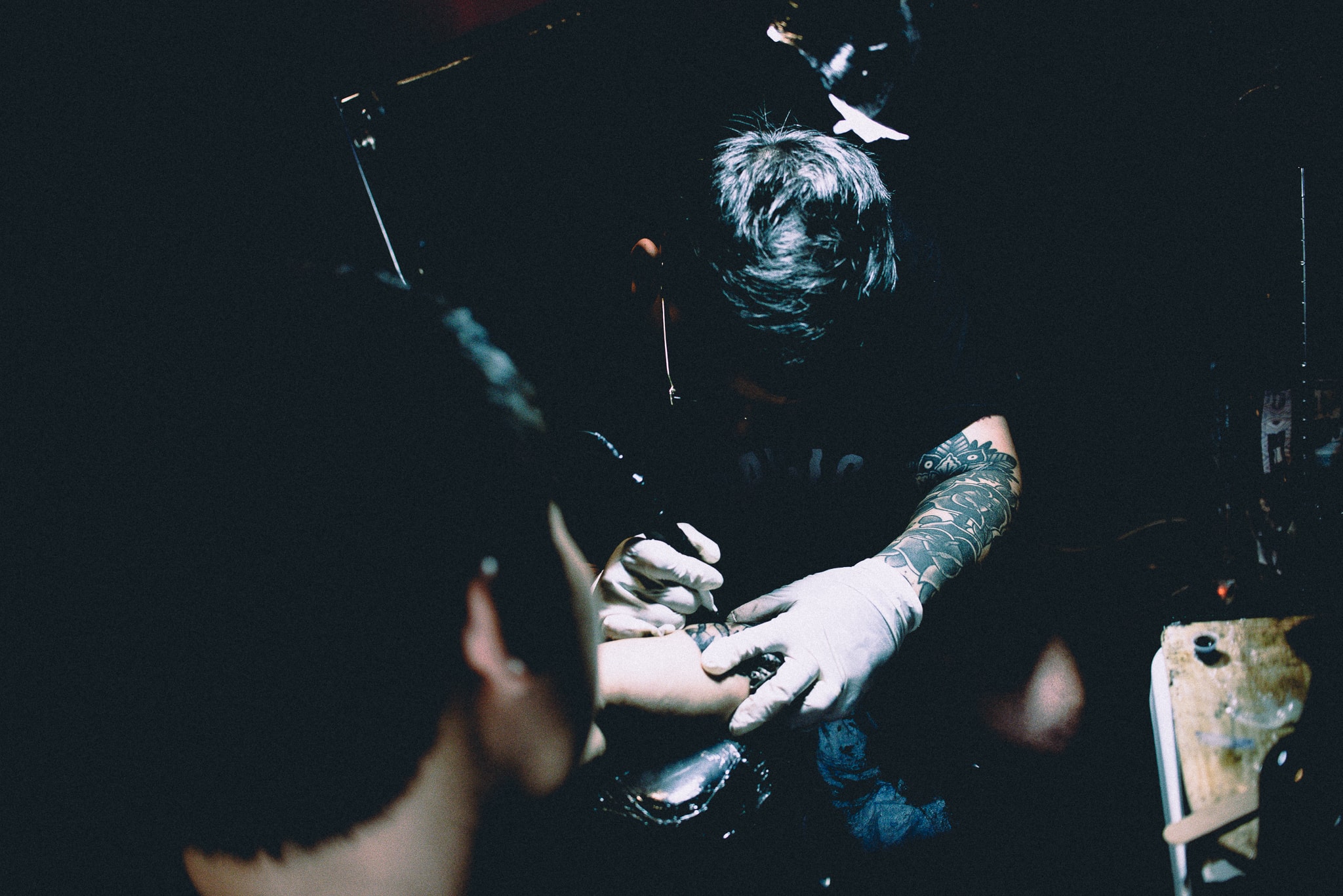 With such a secretive culture, how important is reputation and word of mouth?

Everything is very competitive in Korea, Tattooing is no exception. 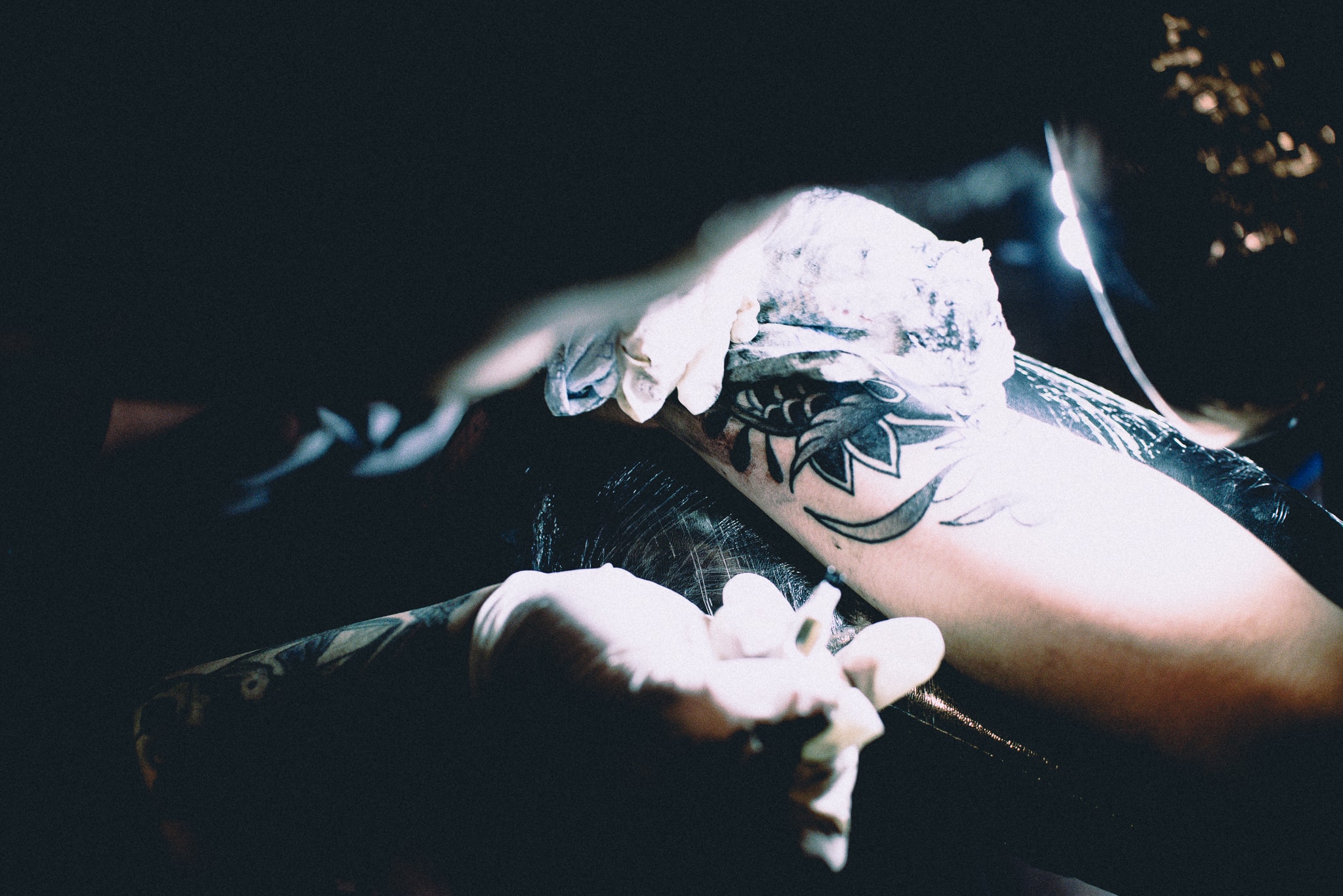 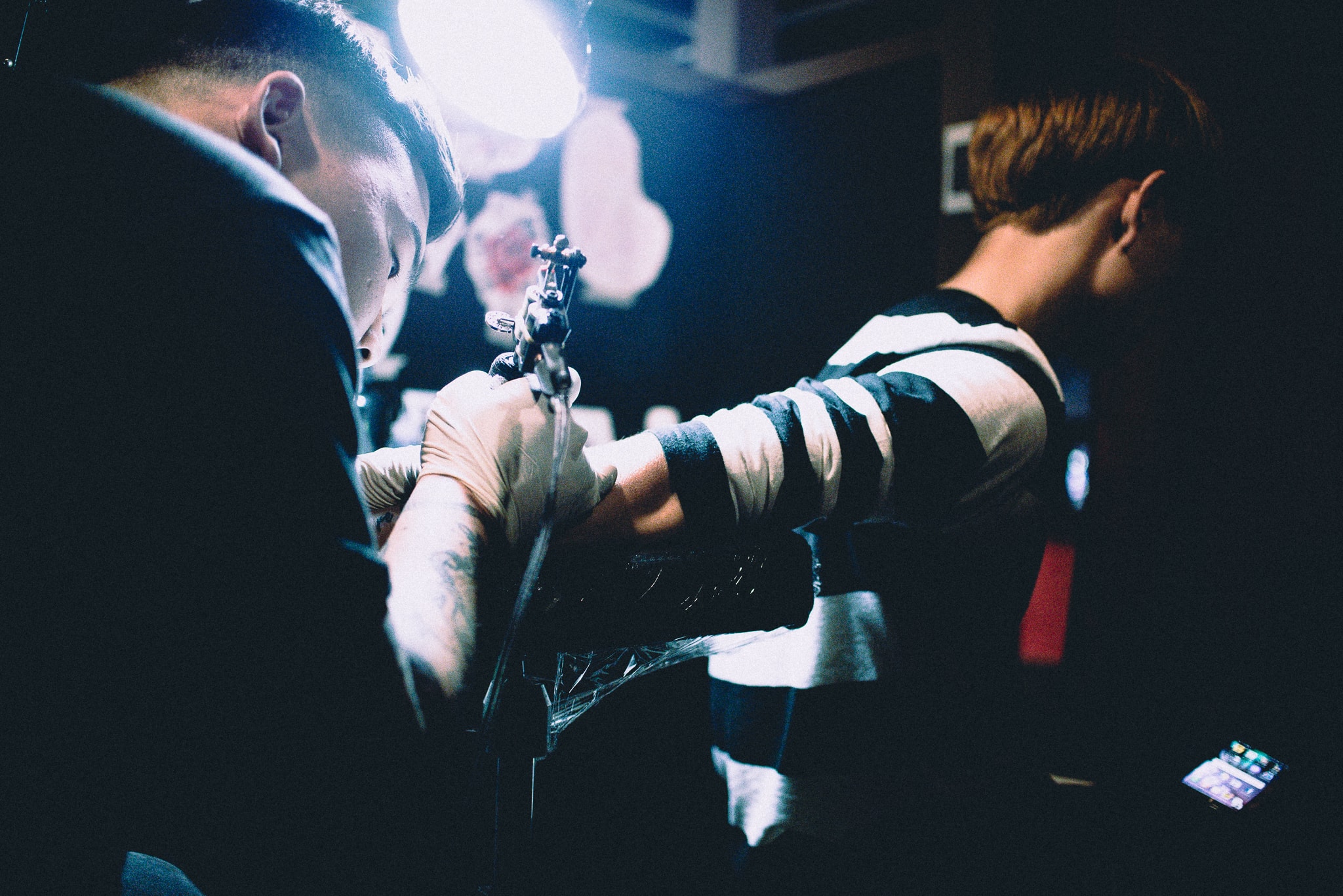 What is it like between Tattoo artists that do know each other?

It’s a culture of trust. If I like your style and you like mine, we share in giving each other tattoos. There is no exchange in money, just trust and ink. 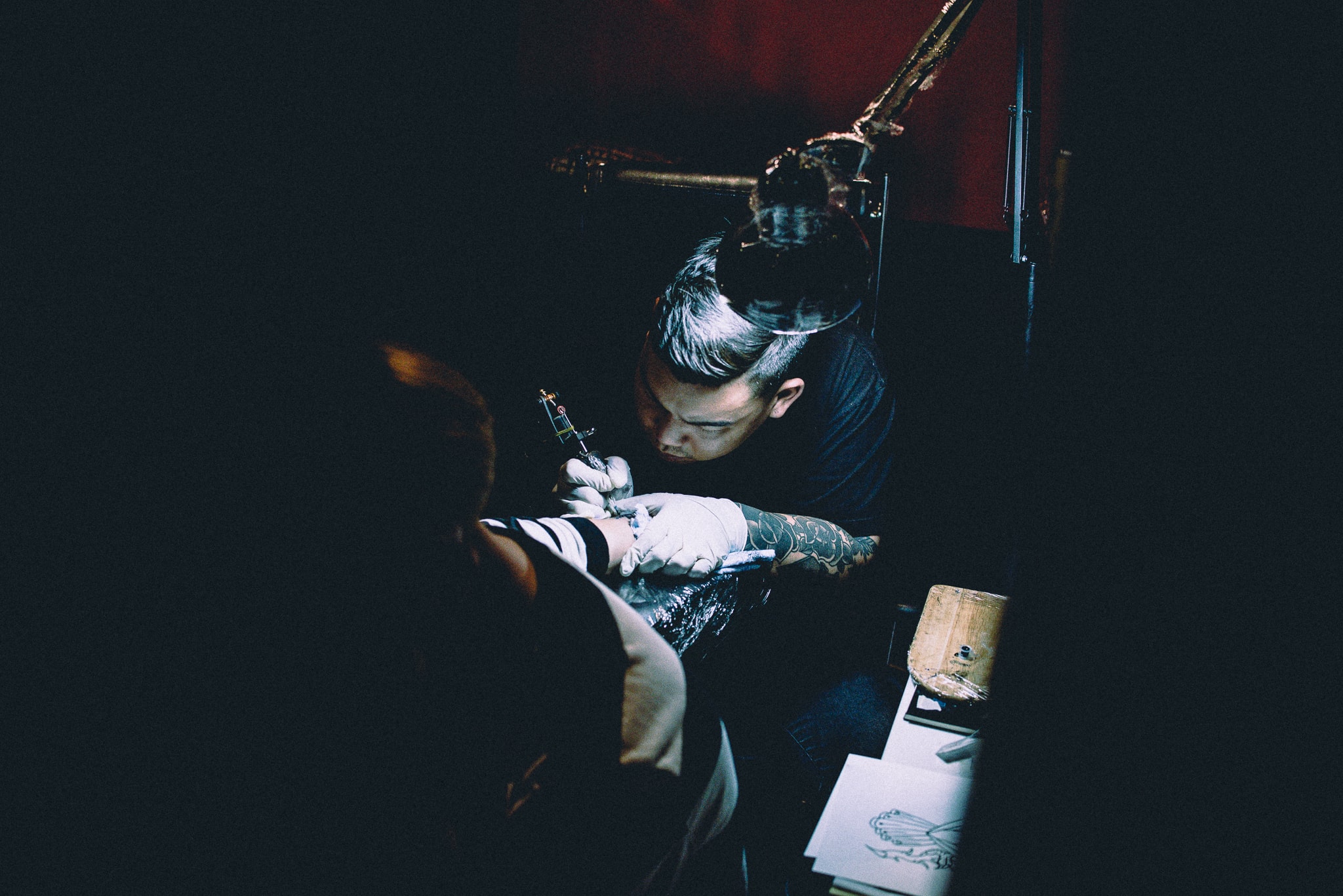 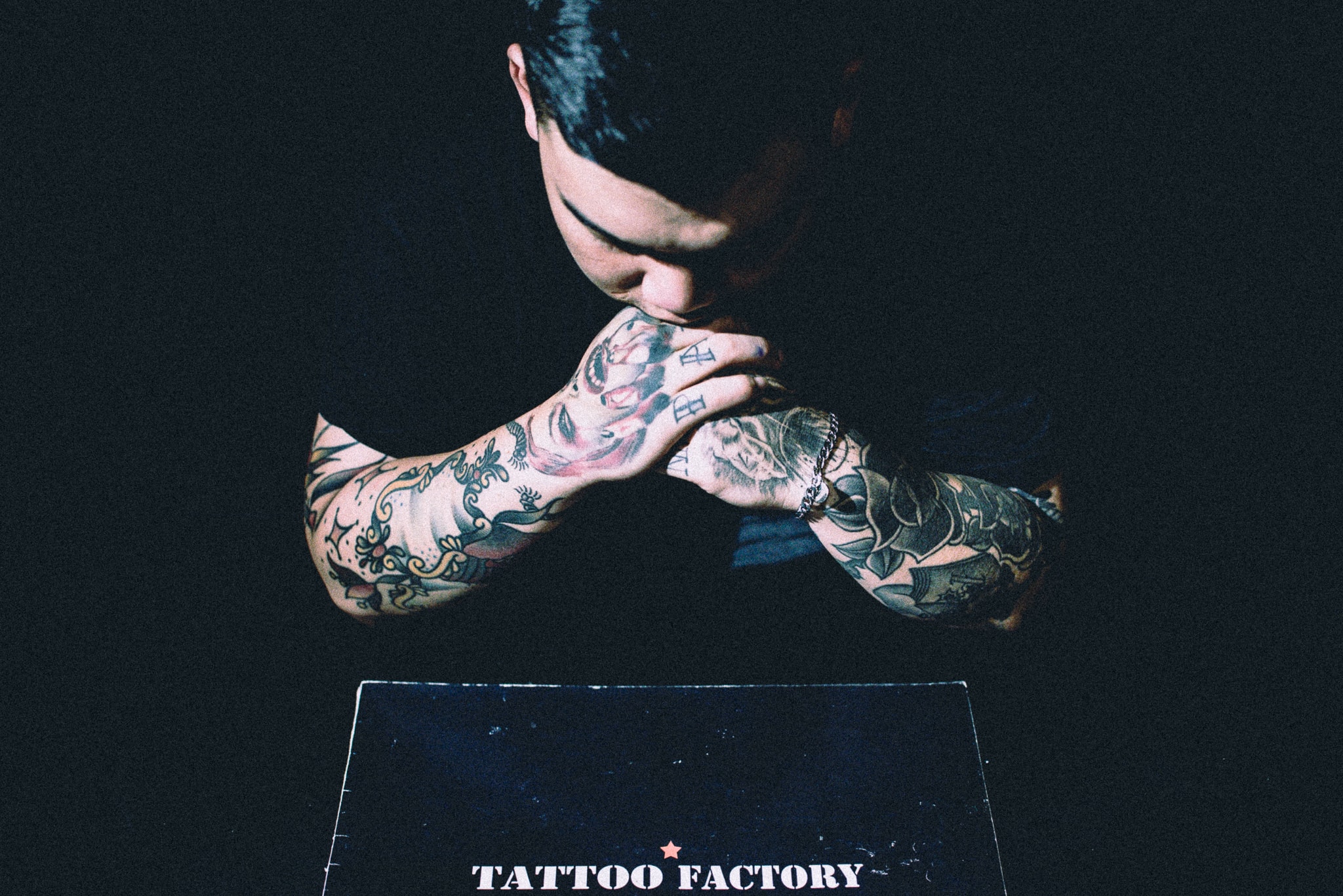